Today we find most robots working for people in industries, factories, warehouses, and laboratories. Robots are useful in many ways. For instance, it boosts economy because businesses need to be efficient to keep up with the industry competition.

Therefore, having robots helps business owners to be competitive, because robots can do jobs better and faster than humans can, e.g. robot can built, assemble a car.

Yet robots cannot perform every job; today robots roles include assisting research and industry. Finally, as the technology improves, there will be new ways to use robots which will bring new hopes and new potentials.

The diagram above shows the First and Second generation of Robots.

The diagram above shows the Third and Fourth generation of Robots.

A Humanoid may be defined as something that resembles or looks like a human and having characteristics like opposable thumb, ability to walk in upright position, etc. Nowadays the concept of Humanoids is being widely implemented in Robotics and these robots are called Humanoid Robots or may be simply “Humanoids”.

The two most important components of Humanoid Robots are Sensors and Actuators.

Sensors are the devices which sense something, like environmental parameters (heat, sound, light, temperature, etc), physical and physiological parameters (like movement, orientation, etc.). Actuators are nothing but the motors which are responsible for the motion and movement of the robots.

1. Sensors: Proprioceptive and Extroceptive
The position, orientation and the speed of humanoid’s body and joint are sensed by the proprioceptive sensors which consist of accelerometers, tilt sensors, etc. Extroceptive sensors consist of arrays of tactels (touch receptors) which are used to provide data on what is being touched, forces and torques transferred between robots and other objects. In humanoid robots, CCD cameras are used for capturing image information and microphones and speakers are used for sound reception and production respectively.

2. Actuators
Actuators are used to perform like joints and muscles. Mostly humanoid robots use rotator actuators to achieve the effect as human motion. The actuators can be pneumatic, hydraulic, electric or ultrasonic.

The prime problems facing Humanoid research can be given as following four questions:

A socially intelligent robot should be able to use imitation for the variety of purposes that humans do. Imitation can be a mechanism for developing social attachments through imitative play and for gaining an understanding of people. Imitation can also be used to explore and expand the range of possible actions. Finally, imitation can be a mechanism for establishing personal identity and discovering distinctions between self and other. A social robot should selectively use imitation to achieve many of these goals. Faced with an incoming stream of sensory data, the robot must make a number of decisions to determine what actions in the world are appropriate to imitate.

The robot must not only be able to distinguish the class of stimuli (including humans and perhaps other robots) which might be a good model but also determine if the current actions of that agent are worthy of imitation.

The airline industry is a global market based around the transport of goods or passengers by air. Airline corporations range in size from huge multinationals, making hundreds of flights daily, to a tiny regional company that depends on a single plane. Airlines provide crucial support to businesses, governments and individuals who depend on international travel or commerce. Despite some rocky financial periods, the airline industry plays an essential role in maintaining a global economy.

Why Humanoids can be used for Boeing & Airbus Economy classes

Approximately there will be at least seven to eight crews working on the economy class. We can minimize the crews by half to 4, and 2 human supervisors or senior crews to oversee them. In the Economy Class, the crews are expected to serve fast as there are normally about 288 passengers. If Humanoid Robots crews can work faster than the normal crews and serve them as per their orders, this save lots of time.

The diagrams above show the humanoid robots, except that there is a human on the right picture.

Humanoid robot is a robot with its body shape built to resemble the human body. The design may be for functional purposes, such as interacting with human tools and environments, for experimental purposes, such as the study of al locomotion, or for other purposes.

In general, humanoid robots have a torso, a head, two arms, and two legs, though some forms of humanoid robots may model only part of the body, for example, from the waist up. 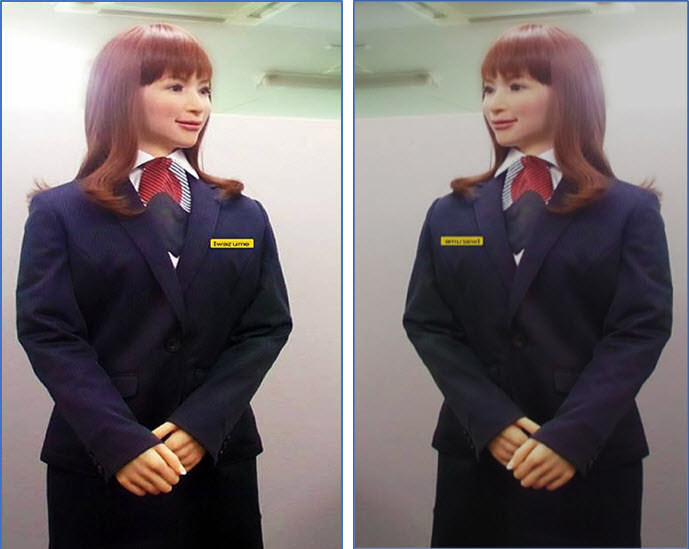 Robots are taking over tasks that are deemed as dull, dirty and dangerous. The idea of Robots with greater intelligence than humans is probably many years away, but the fact that digital technology is emerging at a rapid pace, the idea of having humanoid intelligence may come sooner than we expect. At least for now, current research into the development of humanoids is geared towards replacing repetitive, exhaustive and mundane tasks that are done by human workers.

About the Author: Buvanesvari (or Mary) has substantial years of experience in the aviation industry, specifically in the purchasing field. During her study at SIPMM Academy, she develops a keen interest in the application of robotics in the aviation industry. Mary is a member of the Singapore Institute of Purchasing and Materials Management (SIPMM), and she is completing the course on Advanced Diploma in Procurement and Supply Management (ADPSM) at SIPMM Academy.